Winter usually brings slow days and snow days. The expectancy of warmer days and big walls. Well this off-season was different. Firstly, I painted into December…very unusual. Then right after the holidays I received a mural commission from one of my favorite bars and restaurant, Brown Jerry’s in Pacific, MO. This was a Blues and Jazz theme any way I wanted.
Resulting from this a new customer needed(wanted) a classic car mural in his man cave garage. You know I can paint some baaad chrome! 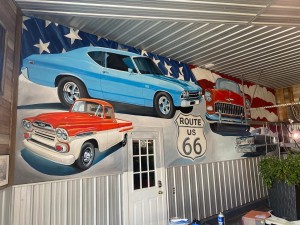 Then I waited for dry weather to begin a 100’ mural in the gorgeous little town of Concordia, MO. Three weeks we waited for the right climate. Eventually on May 7th I packed up the show and landed in Concordia at the request of the Lions Club. trim.C770AC2A-EE48-4356-B884-A355D06D2344Patriotic they wanted and patriotic they received! Another beautiful waving American flag and a large version of the preamble of our constitution. 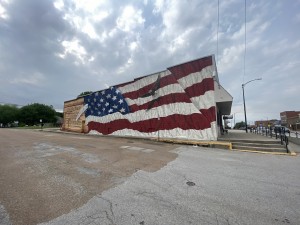 Next, Hannibal awaits for a Mississippi Showboat mural. See you there! 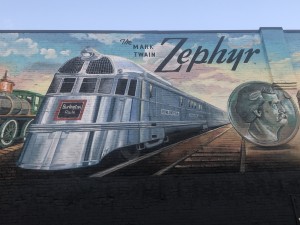 It was a very hot week, but fifty hours later the two flag mural on the corner of VFW Post 2446 was complete. The building has some miles on it but with the addition of this 400 sq. ft. painting, it shows the American spirit of its members. Located on Bird street in Hannibal the art gives visitors, tourists and members a location for the most patriotic photos. Most importantly the flag mural gives the organization a large presence in the downtown area! 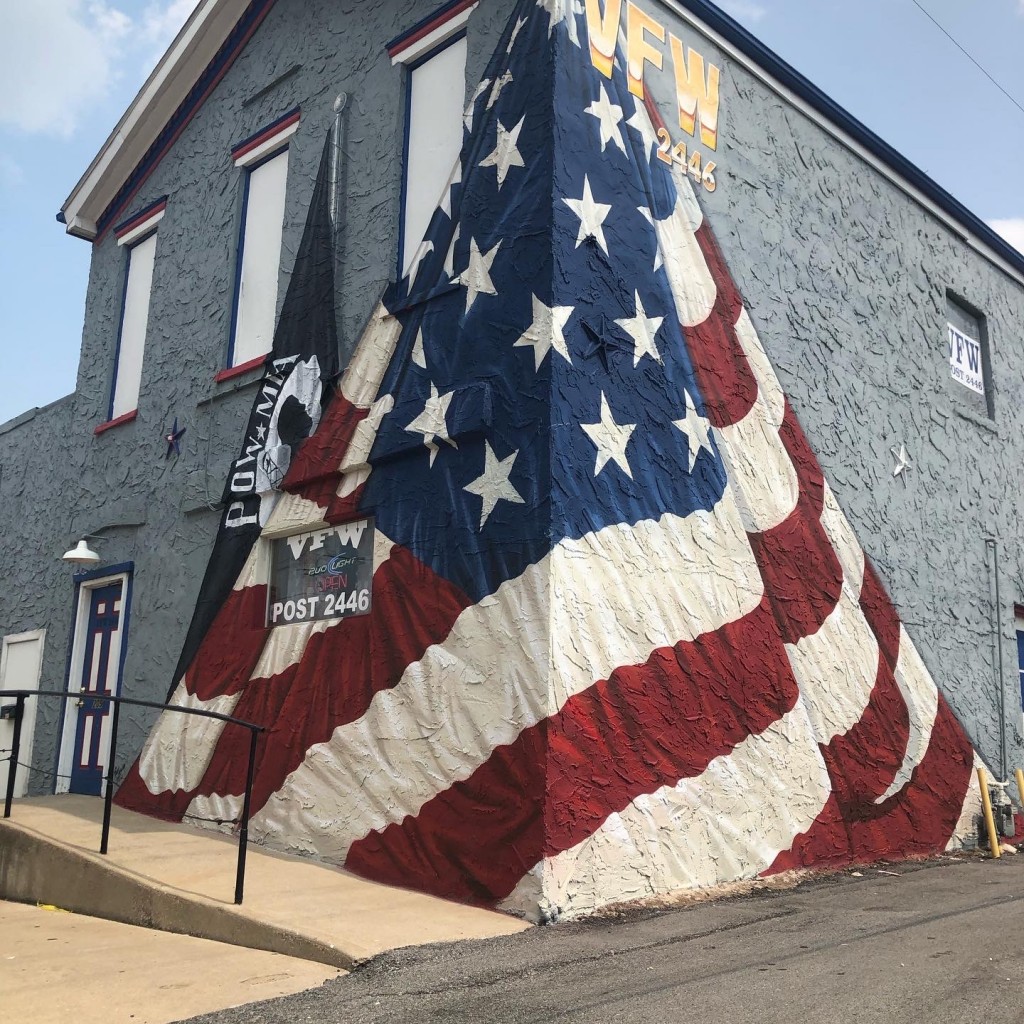 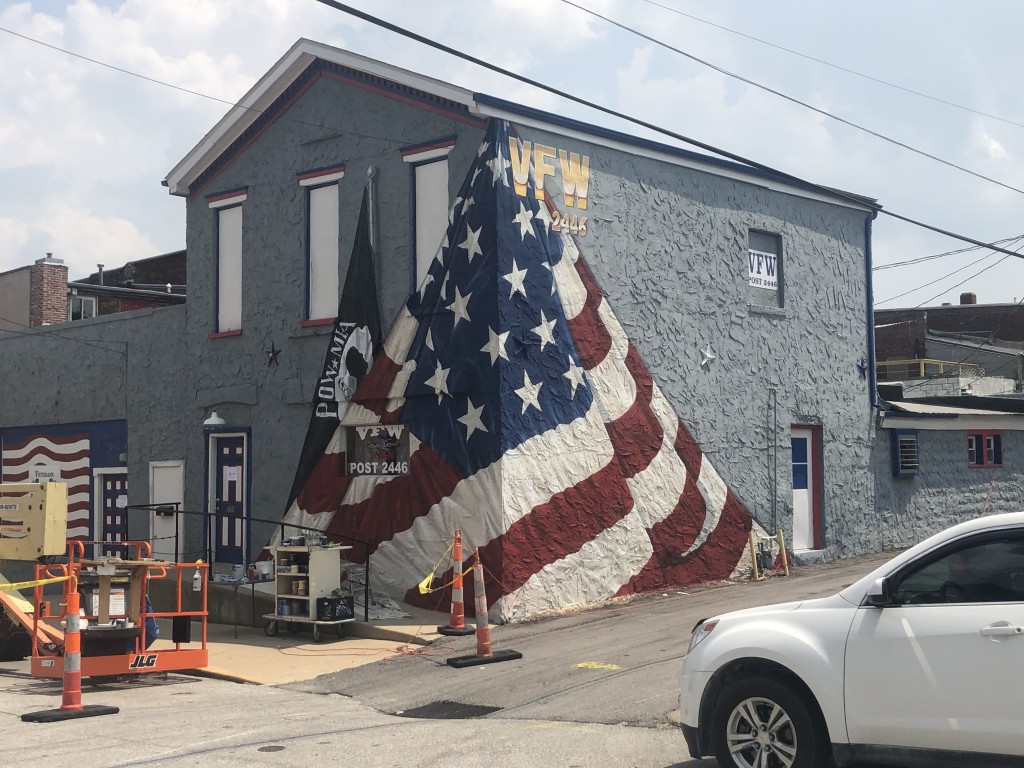 Every mural I paint isn’t in Hannibal, but it sure seems like it. I began the outdoor Spring painting season at the Main Street side of the Hannibal History Museum. Deborah White commissioned me to create a second mural for the museum showcasing the Hannibal trolley company that ran for so many years. I came up with a more graphic travel stamp design. It worked out great! 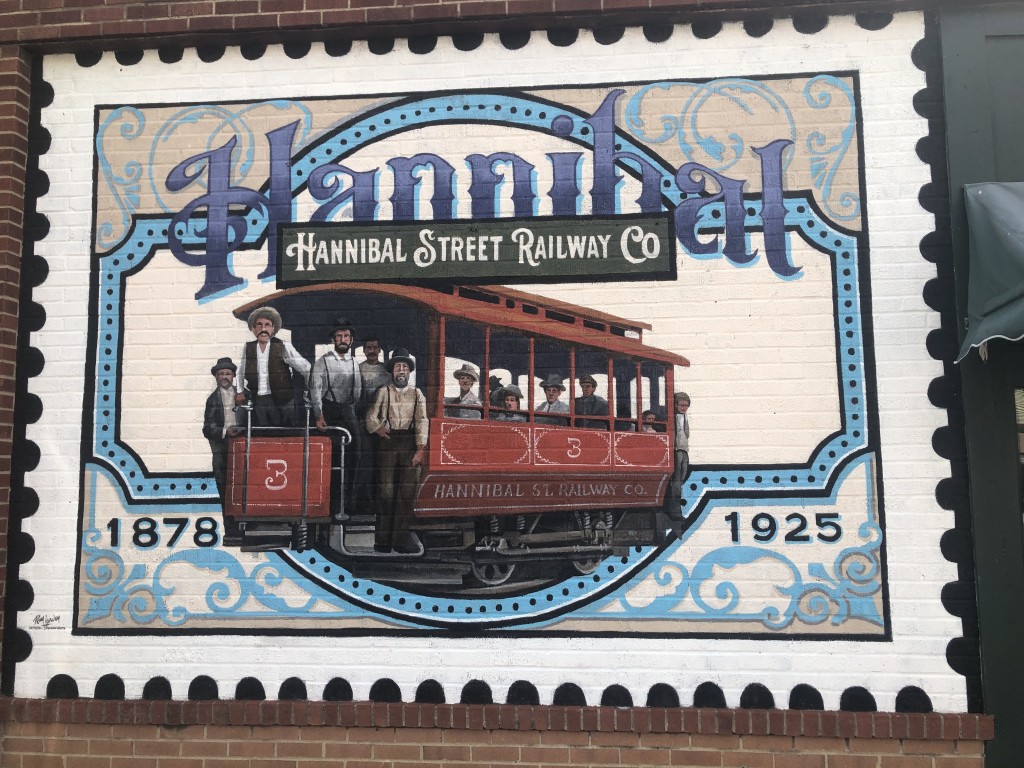 Then, Deborah White and Lori Kemp called me to paint these two selfie spot murals in the city butterfly garden. One being a peacock design and directly across from that is a butterfly design! 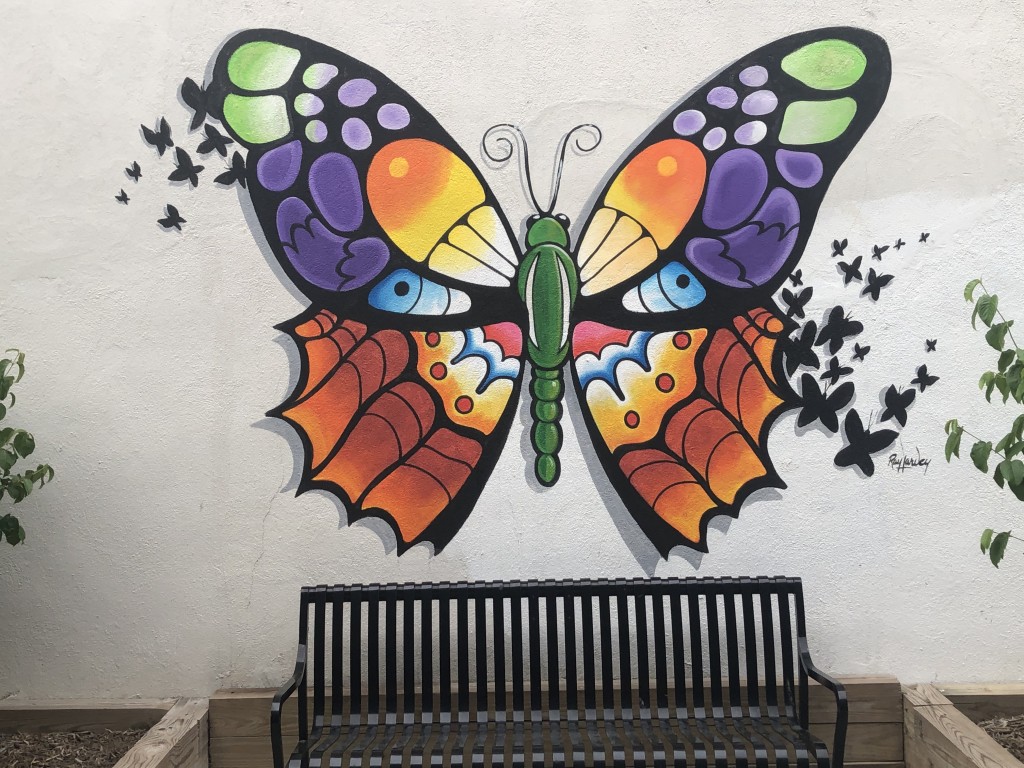 In June I began a biggie! Continental Cement Company, with the urging of Deborah White once again, commissioned me to create a very large heritage mural on 3rd street. My vision was of American immigration and exceptionalism. I wanted to tell the story of these workers from Eastern Europe and Southeastern America to the plant near Hannibal. Continental is the last American owned cement company in the country. I’m proud to have told this story! 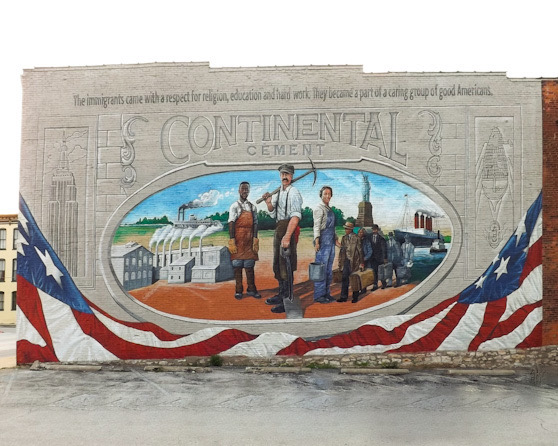 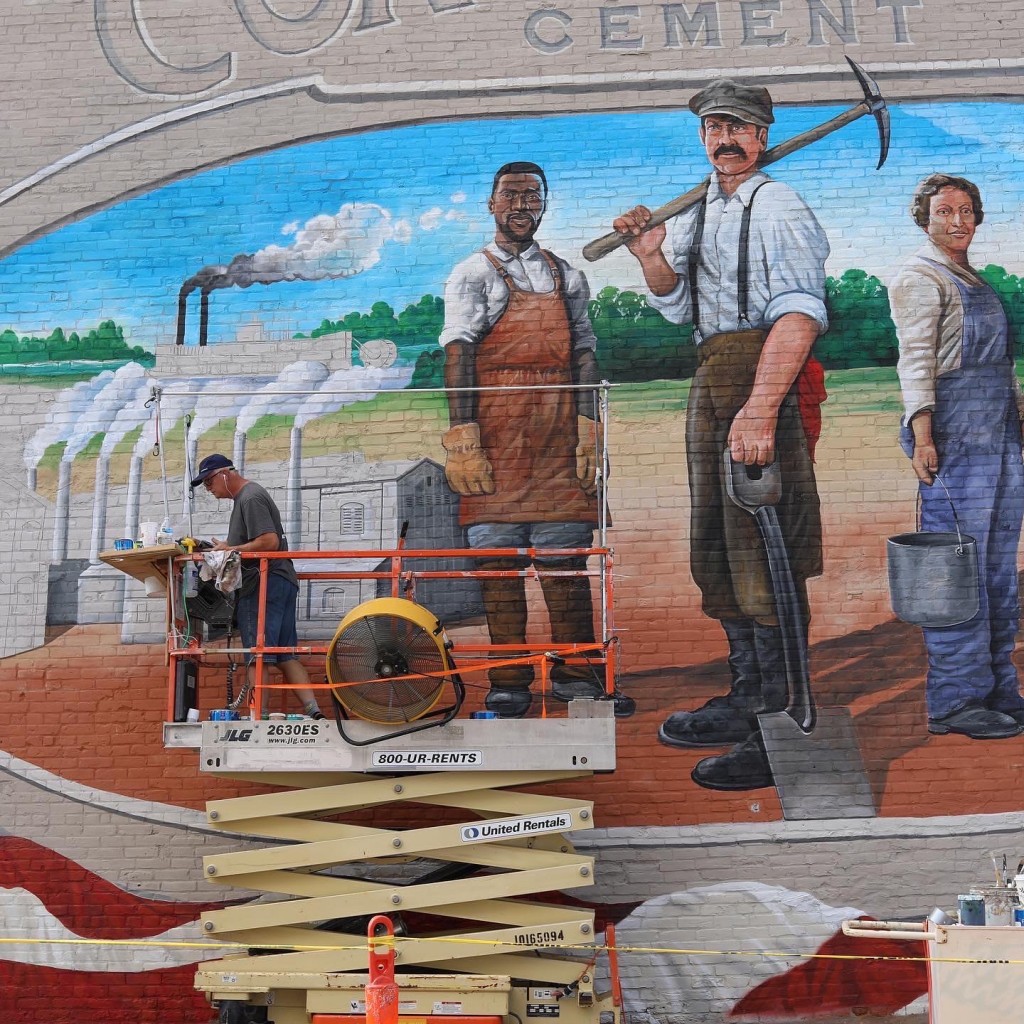 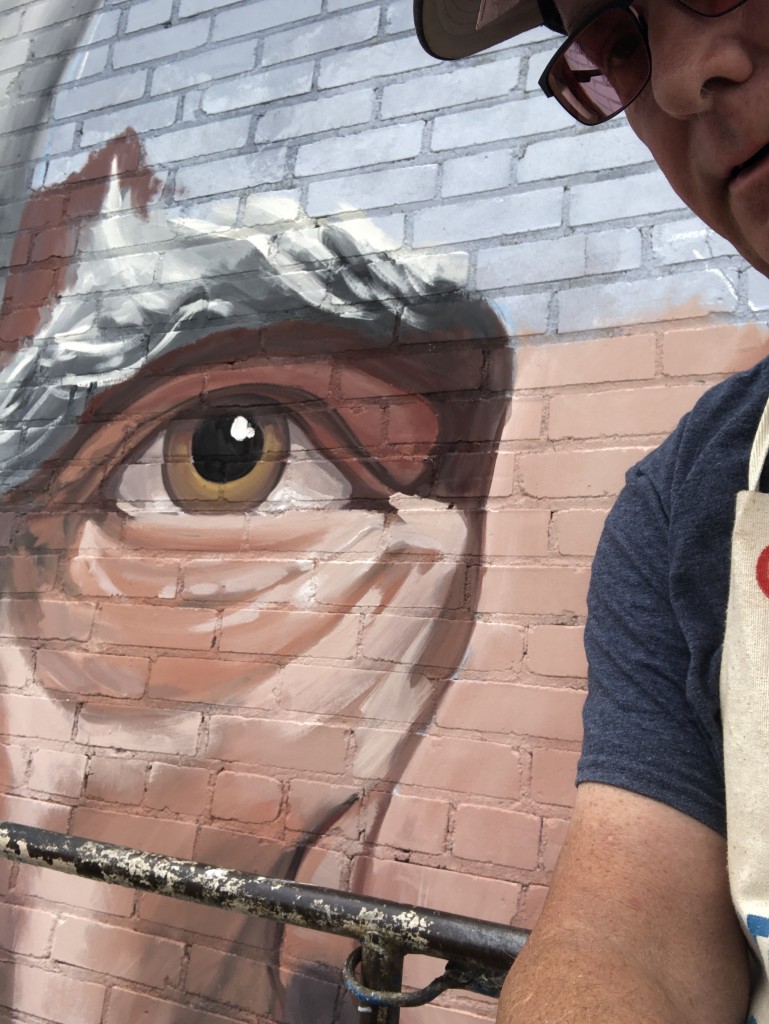 Hey Hannibal! I’m asked often so here is the official Holy list of my art murals in Hannibal with addresses:

AND, it looks like four more coming this summer! If you go by and view or take a photo, please post and tag me please!

The fifth mural commissioned by Mr. Brad Walden, the visionary behind the Hannibal mural revolution, is now complete. In the old Gooch food market new construction has developed Walden’s new office including this conference room. A throwback photo of a moment in 1958 in front of the store gave the motivation for the painting. It measures 20’ wide and 10’ tall. All painted in shades of gray bringing the rooms vibe back to mid-century style! 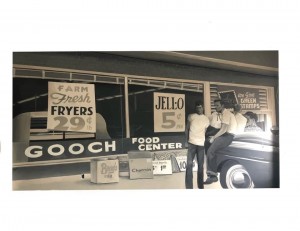 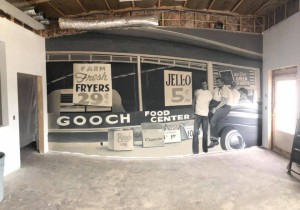 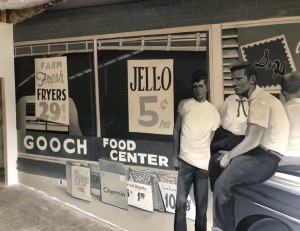 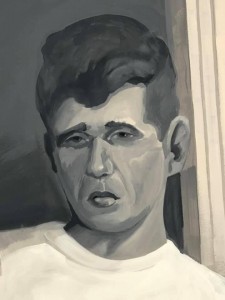 Well, That was quite a year!

Posted on January 1, 2021 by Administrator

I don’t have to replay the downs of 2020. I’d rather focus on the highs. It was a very busy year for Ray Harvey Art! I really lost track of all the murals, locations and the many new people I met. Here is a snapshot of the way it was! I’m already following up on orders and commissions for this Spring. 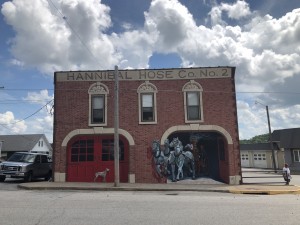 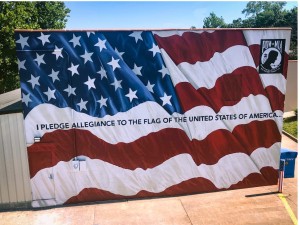 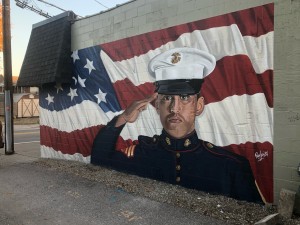 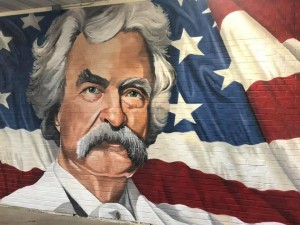 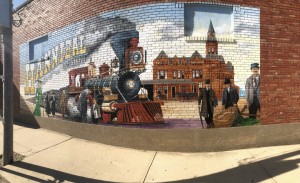 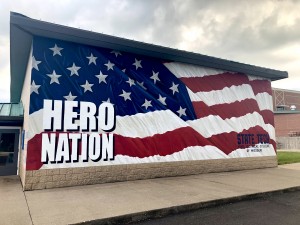 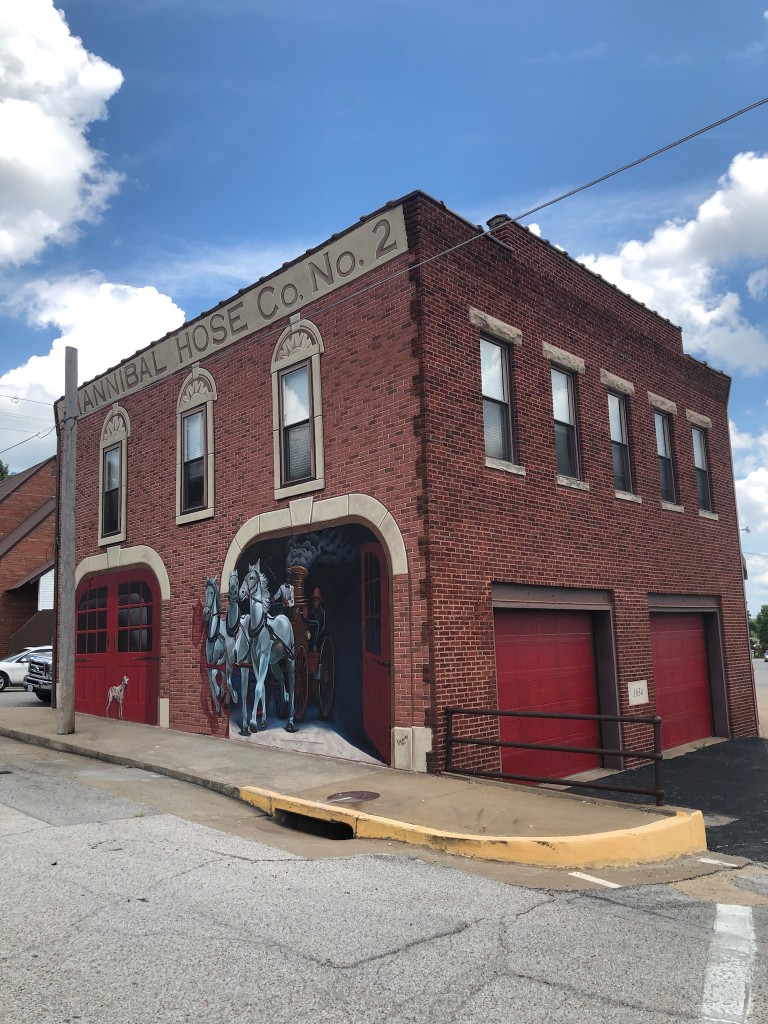 The HannibalHose Company #2 firehouse mural was completed last week. Commissioned by Mr. Brad Walden, this once proud firehouse turned office building received an artistic facelift! This is the third mural commission directed by Mr. Walden. The wall was patched, skim coated and then layered with a new surface. Then I designed a Trompe L’oeil designed mural. French for “fool the eye”, this technique creates what doesn’t exist. Each brick, molding, door, dog and horse was painted. Only the three upper windows are actually real. The new wall gives the public a great opportunity for selfies and photos. 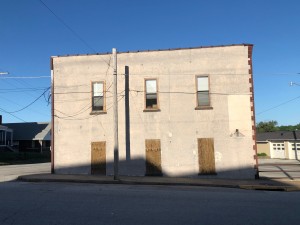 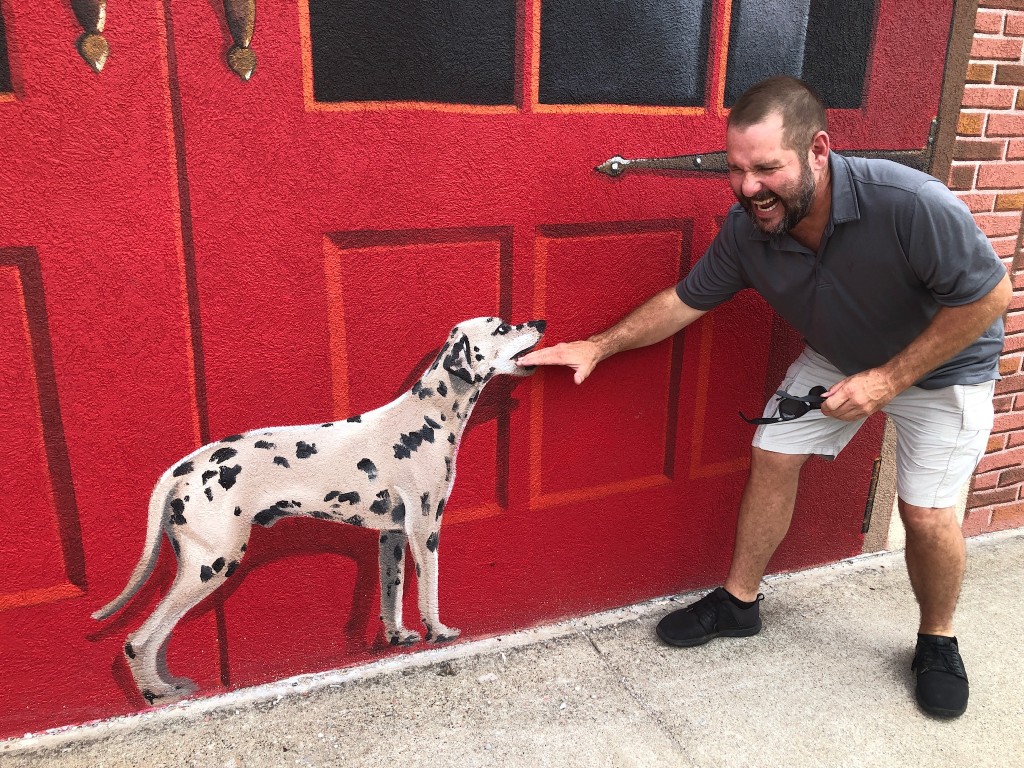 This past week the first Hero Nation Mural was completed and signed at the State Technical College of Missouri. The 41’ wide painting was completed just in time for the tailgate graduation which took place on May 30th. The mural pays respect to the working sprit of Americans and students alike whom have been the backbone of the country. The art will grace the entrance to the campus and be a destination for photographers, students, veterans and others wanting to use the backdrop of the American flag. 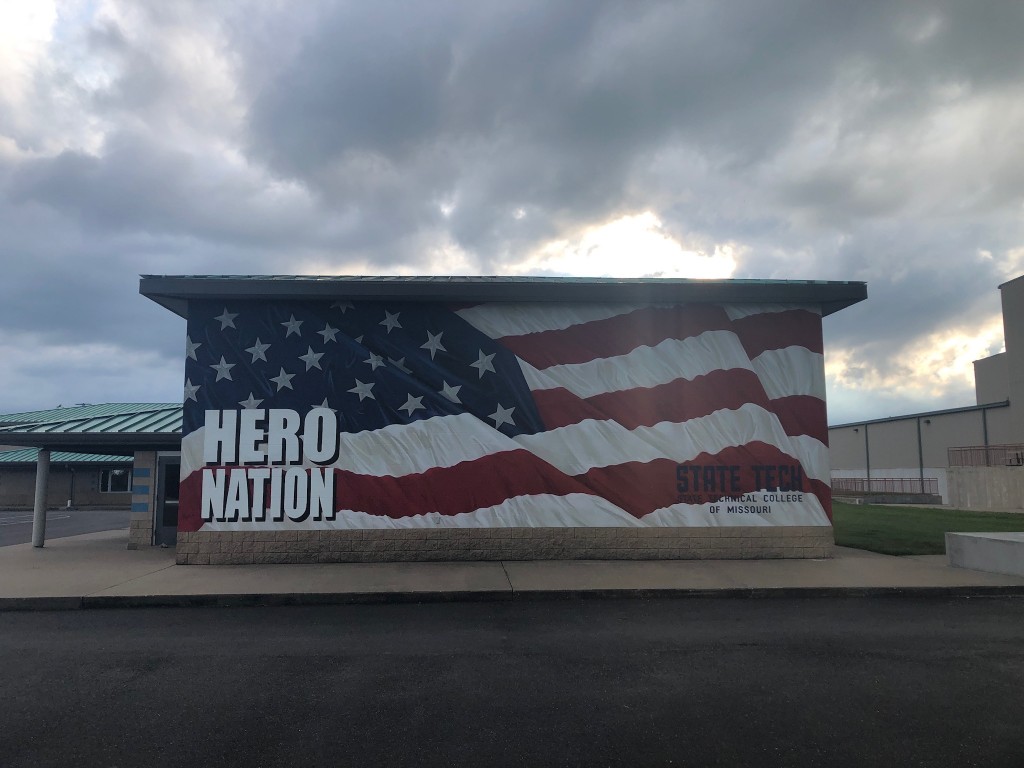 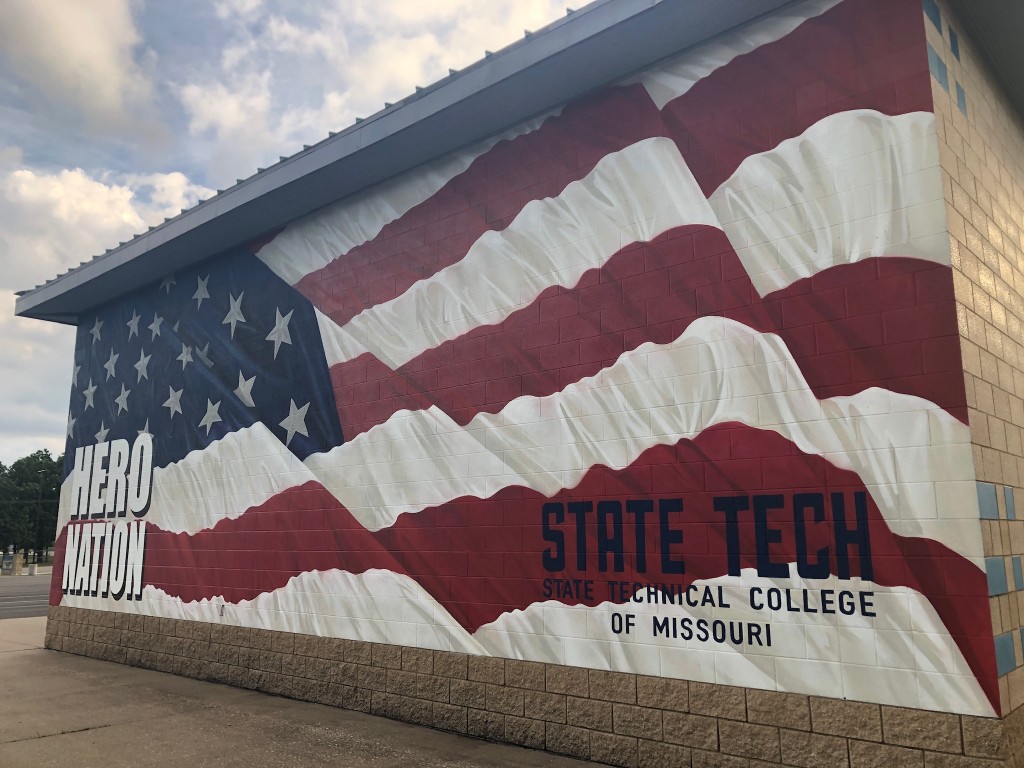 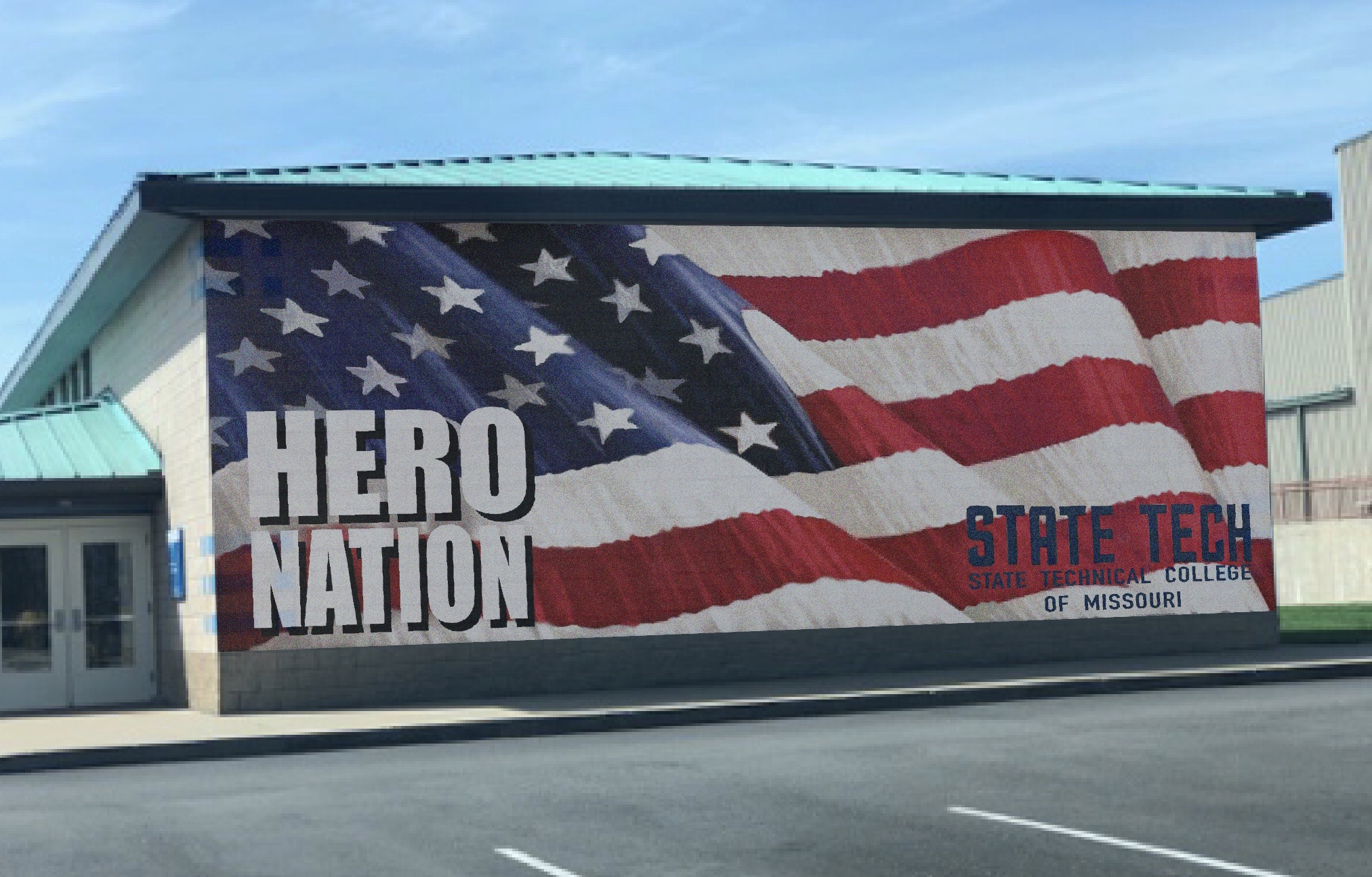